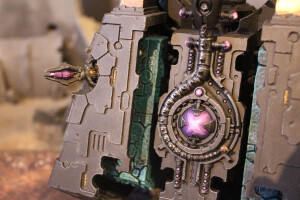 5) I forgot to re-roll “1”s when I reanimated my Warriors.  Other than that I played a pretty good game.

On 01 Apr, 2021
Current Events & Announcements, The Overwatch
By : Shawn Gately
No Comments 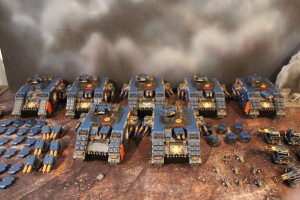 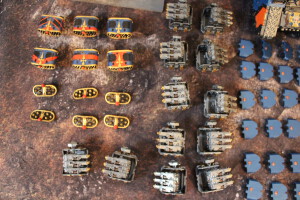 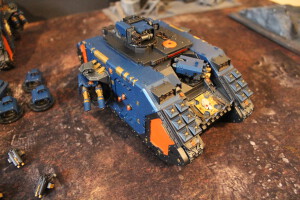 This is an unusual project we completed at BTP recently.  It consists of seven space marines land raiders with a vast amount of magnetization (magnets).  These make a land raider (the normal kind), a land raider redeemer and a land raider crusader, all three variations which we call a “triple”. The color scheme is the client’s original development.  They also make a land raider helios with missile launchers up top!

On 29 Mar, 2021
Current Events & Announcements, The Overwatch
By : Shawn Gately
No Comments 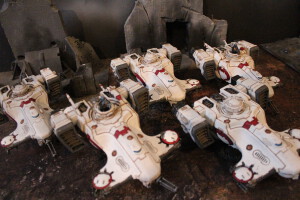 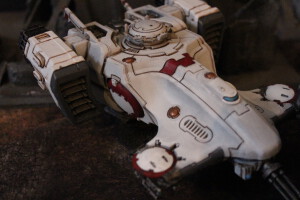 A while back I bought these Tau Devilfish second hand for $25 each and refurbished them.  They came without drones.  I thought how hard could it be to replace the drones?  Well, this was in the age of shield drone spam, and I didn’t know it.  Drones were in short supply.  It cost me $10 per model to  get the drones, so I ended up not saving very much.  And not using them very much either.  I love this model, but it didn’t stand up in the new edition.

On 25 Mar, 2021
Current Events & Announcements, The Overwatch
By : Shawn Gately
No Comments

I played my first game with Hexmark destroyers yesterday.  I brought two of them in my list against Genestealer Cult.

I read that they weren’t that great, but wanted to see their performance for myself.  I kept one model in the hyperspace dimension (reserves).  The other I had just pop out on turn 2.

Hexmarks aren’t really good in melee, but they are no slouches either, with T5 and W5 as well as 4 attacks.  They have no special weapons, just clubbing people with their pistols.  In a pinch they can be used to tie up a light unit.  Where they really shine is the mid/late game where they can arrive in much needed spaces and mop up small straggler units and backfield objective holders.

They have an additional defensive power: Living Metal allows them to regenerate one wound a turn.

They are great at shooting with six pistols.  This also allows them to shoot while in melee.  I found that one round of shooting will peel off ONE marine equivalent (two wounds), and against lightly armored units at least three models, and maybe peeling off a unit of five.  They ignore cover and also hit in overwatch on a 2+.  All their attacks re-roll ones, so pretty much they hit six times with each volley.  And at S6 they get 2+ to wound light infantry.  On top of all that they get an additional attack each time they kill a model with their pistols.  On the outside they could conceivably wipe out a unit of twelve models.

With Aetheric Interceptors you can warp in and shoot in response to an enemy unit coming in.  The obvious benefit is the surprise shooting, but it can also cordon off an area from further incursion, possibly keeping objectives clear.  You can also slap the stratagem card down and shout “surprise mother****er!”

In my game the first Hexmark warped in and blew up four out out of five Acolytes that were camping on a back objective.  It then killed another four Acolytes that charged it (with overwatch its pistol fire is undiminished).  The second came in while the bulk of GSC infantry were popping up from underground, after the first unit arrived, my Hexmark warped in, shot down half the unit, took the backfield objective and created a protective bubble against the rest of the units.

I love them.  They are flexible, pack a punch, and give you a lot of options.  An invulnerable save of 5+ would make them absolutely perfect, and push them into auto-include range.  Hit and Run would be a tremendous option to that, letting them survive a close encounter.

I liked them and they did a lot of work in the late game.

With hunters’ instincts honed over aeons, the Deathmarks pounce precisely at the moment their prey enter battle, gunning them down before they can even act.

Use this Stratagem in the Reinforcements step of your opponent’s Movement phase, after an enemy unit has been set up on the battlefield. Select one HYPERSPACE HUNTER unit from your army that is either on the battlefield, in a hyperspace dimension or in Strategic Reserves.
Inescapable Death: Each time this model makes a ranged attack, you can ignore any or all hit roll and Ballistic Skill modifiers, and the target does not receive the benefits of cover against that attack. In addition, each time this model fires Overwatch, it scores hits on unmodified hit rolls of 2+, instead of 6.
Multi-threat Eliminator: Each time an enemy model is destroyed by a ranged attack made by this model’s enmitic disintegrator pistols, after this model makes the rest of its attacks, it can shoot with one of its enmitic disintegrator pistols one additional time. These attacks cannot generate additional attacks.

Hardwired for Destruction: Each time this model makes an attack, re-roll a hit roll of 1.

On 24 Mar, 2021
Current Events & Announcements, The Overwatch
By : Shawn Gately
No Comments 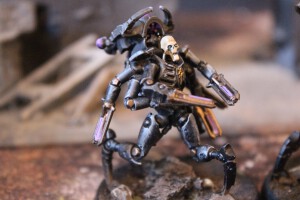 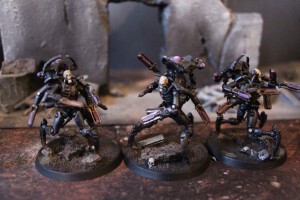 Converted up some Hexmark Destroyers. I’m not sure I want to put them in my army, but I do want to try them out, I have … theories. I made them while watching Terminator 1. They are made using the inexpensive (for now) Skorpekh chassis with extra warrior arms, a Praetorian backpack, and the tips of Deathmark rifles, all easy to acquire extras. Though you do need eighteen of those rifles.
“Hexmark Destroyers were once Deathmarks. Bursting from their dimensional oubliettes like ambush predators, these hunchbacked monsters unleash inescapable hails of enmitic fire. Independent ocular targeting and optimised firing patterns leave their prey with no escape.”
Read More