On 09 Feb, 2021
Current Events & Announcements
By : Shawn Gately
No Comments 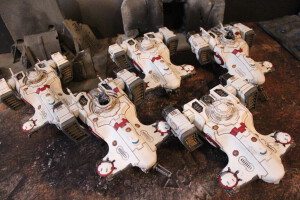 Here is a group of Tau Devilfish transports for 40K.  I recently sold these.  I had them for a much larger Tau army, but in more competitive games they weren’t that helpful.  I used them as board control in previous editions and had a lot of fun, but now tanks just disappear from the board, which makes play smoother, but a bit more boring.  Anyway, just too overcosted in 8th edition.  I hope their new owner finds good use for them.

If I don’t use a model in a whole year it’s time to sell it!

I still dream of a time when I don’t have to sell any models and I have space to just store and display everything.  Well, I used to have that back in Spanish Fork, perhaps I will have it again.

On 05 Feb, 2021
Current Events & Announcements
By : Shawn Gately
No Comments 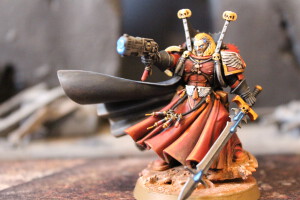 Hey Hey BTP fans!  Just finished up this Mephiston with magnetized arm options.  Perfect for a Blood Angels 40K army.  Who thought to have an option where he’s sniffing his two forefingers?  It’s the little things. 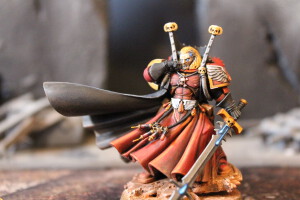 Hero of the Imperium Special (for Spring 2019)

On 06 Mar, 2019
Current Events & Announcements
By : daniel
No Comments

This is a limited offer; two slots.

Once you pay, the credit becomes available by by degree each month over ten months.

This is the best shot. Not cumulative with other specials. Can only be used for new projects (not to pay off old ones).

On 06 Mar, 2019
Current Events & Announcements
By : daniel
No Comments

It is 2019. January 1st marks fifteen years in business. Scoreboard: clocking in at over 8000 projects. I am about to turn fifty. My predominant feeling is one of accomplishment. I feel like I’ve accomplished a lot in life. I’ve had my adventures and many profound human experiences.

My other feeling is “what’s the point of that?”

When I saw my father dying, the cancer having spread to his bones, and I was given time alone with him to say goodbye, he grabbed my hand and he was trying to say something, but only his lips moved, like a skeleton burning in desert of agony. I could only thing “what’s the point of this?” Here was a man, admittedly a tragic hero, who had made his mistake but also soared to the heights of recovery and love. In his later years he was absorbed into a different family by his common law wife. They knew him as a different man, adored him. He was a different person. But it didn’t matter in the end. Just… suffering. Now it’s fifteen years later and I realize that his story doesn’t have to be my story. That was then. This is now.

In October 2014 my wife of twenty years and I went down to file our divorce papers. As we left walking back to the studio she was shaking with emotion. I had never seen her like that. Twenty years. “What was the point of that?” And it’s an endless cycle of this same thing.

Even the joys of life are repetitious.

It feels more like writing a book. What’s the point of writing a book? Maybe I’m on a cosmic reality show– mind-blanked and driving a meat puppet for the entertainment of my intergalactic subscribers.

Special for December- L3 painting half off

On 12 Dec, 2014
Current Events & Announcements, The Overwatch
By : Shawn Gately
No Comments

Here’s the deal you just can’t pass up.  In December we are doing L3 painting at half off.  That’s it, that simple.  Limited slots, so get it while it’s hot.

Contact projects@bluetablepainting.com with inquiries or to get a pricing sheet.

To get the special put “December L3″ in your subject line.

That will make infantry $4-5 each typically.

Here are the caveats:

2) This is only for new orders paid with money (not with credit),

3) not cumulative with any other offer or special,

4) your project has to have relatively simple instructions and a cohesive color scheme (so not fifty models all with a different color scheme, and five pages of instructions),

5) There are only a limited number of slots for this, so it might end before the end of December.

6) Details are subject to change and might get tweaked as the days go on.